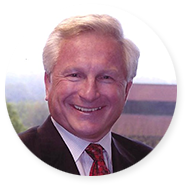 Economic activity, as measured by year over year GDP growth, fell among key Southeast Asian countries in 2019.  This result was attributed to what was expected to be a general slowing in global economic growth but was worsened by global trade tensions and rising concerns and impacts over the coronavirus in the region. 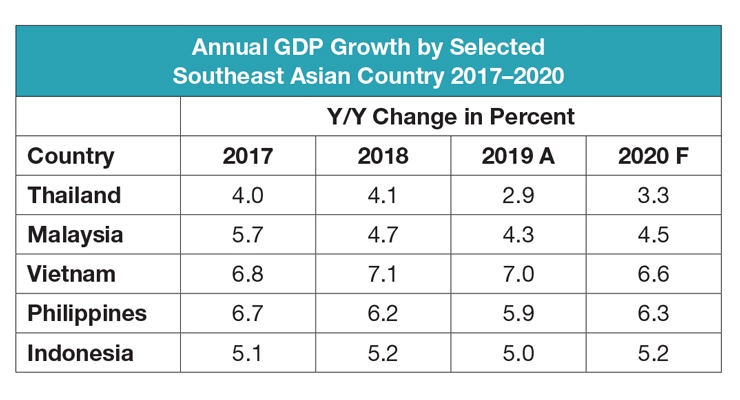 GDP growth in Southeast Asia’s second largest economy, Thailand, was 2.9% in 2019, the lowest in five years.  In Malaysia, GDP growth in 2019 was 4.3%, the lowest in ten years. GDP growth in Vietnam continued to lead the region in annual GDP growth with 7% in 2019.  The region’s largest economy, Indonesia, recorded GDP growth of 5% in 2019 and the Philippines 5.9%.  When evaluating GDP movements in what are still small economies, one must be aware that smaller changes in GDP will result in larger year over year percent movements than in larger economies.  Annual GDP growth, as measured in year over year percent change, will ebb over time as the aggregate economies in each country become larger.

Nearly all the national governments in Southeast Asia began reacting to the slowdown in economic growth in the second half of 2019 with a variety of economic stimulus measures.  These measures included lower interest rates, investment incentives, increased infrastructure spending and the like.  While these measures are well underway, the new threat of the coronavirus in the region and impact on the economies in these and other countries must be of concern.

In 2019, there was no greater impact on Southeast Asia nonwoven producers than the trade dispute between the U.S. and China.  This event primarily affected the large fine denier spunbonded polypropylene business in Southeast Asia where exports are significant.

Fine denier spunbonded nonwoven capacity utilization in Southeast Asia slowed in 2019 as a result of a reduction in export demand.  The U.S. imposed import duties of 25% on China made nonwovens in May.  This led to rapid reduction in China exports and a worsening in the oversupply of these nonwovens in China.  This situation increased competition for these nonwoven exports throughout the entire region resulting in lower export demand for Southeast Asia producers and lower capacity utilization. With the signing of Phase One U.S. – China trade agreement in January 2020, it is expected that export flows may return to normalcy although risks remain that a trade war between China and the U.S. may rekindle.

Despite the short term impacts of trade disputes and what is hoped to be a soon to be resolved health care crisis, Southeast Asia remains an attractive region for nonwoven growth driven by favorable demographics, economic conditions, increasing market penetration and vibrant local and export market demand.  The near-term impacts of the economic slowdown in the region and their relatively minor effects on manufacturing investment and consumer spending are expected to be quickly addressed through economic stimulus programs, notwithstanding the coronavirus threat.

Increasing market penetration for disposable and durable nonwovens in Southeast Asia and China, where market penetration is still low, is a positive predictive factor for good nonwoven demand growth in both Southeast Asian markets and in their export markets as well.  Over time, nonwoven producers in the ASEAN 5 countries are expected to benefit from good export demand from China, Japan and other countries in and outside the Asia-Pacific region.  The largest market for converted nonwoven products will be in hygiene end uses followed by nonwovens used in durable geotextile and other markets.

Several global and regional disposable hygiene product manufacturers have converting operations in Southeast Asia.  These producers include Kimberly-Clark, Johnson & Johnson, Kao, Procter & Gamble and Unicharm.  Increasing converting capacity in Southeast Asia speaks to demand growth in the region and the region’s popularity as a manufacturing base for exports to other Asian locales. 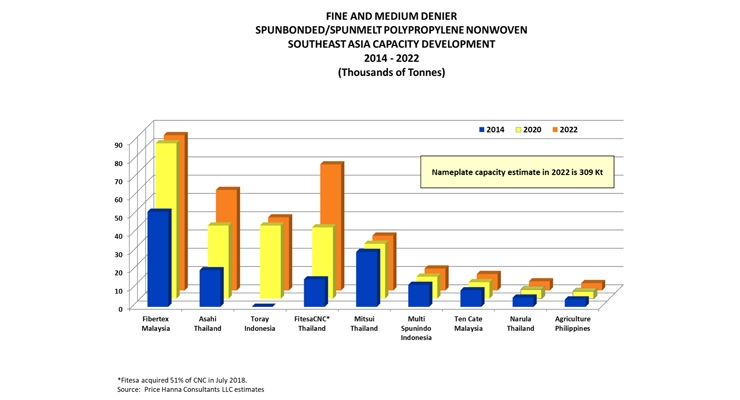 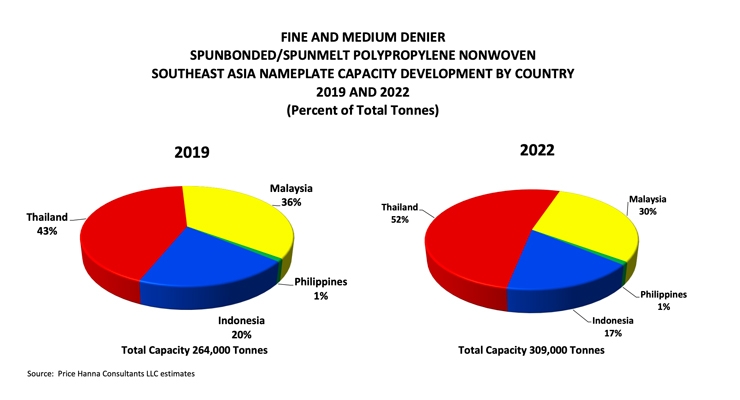 During 2014 – 2018, the installation of fine denier spunbonded and spunmelt polypropylene nameplate capacity in Southeast Asia grew an average of 9.8% annually from 176,000 tonnes in 2014 to 255,000 tonnes in 2018.  Of the 79,000 tonnes installed during this period, CNC (Thailand) installed 24,000 tonnes, Asahi (Thailand) and Toray (Indonesia) 20,000 tonnes each and Fibertex (Malaysia) 15,000 tonnes. No new capacity was installed in 2019 and none is expected to be commissioned in 2020.  In the second half of 2021, Asahi will begin installation of a new line in Thailand with a capacity of 15,000 tonnes.  In the same period, Fitesa/CNC will install an R5 line with a capacity of 30,000 tonnes in Thailand.  Both these lines will be fully commissioned in 2022.  With these investments, fine denier spunlaid capacity will increase by 45,000 tonnes or 17.6%.  This new capacity may result in a period of oversupply in the region.

In 2019, the nameplate capacity of both fine and medium denier spunbonded/spunmelt polypropylene technology in the Southeast Asia is 264,000 tonnes and accounts for about 7% of all global capacity in this technology category.

Spunbonded/spunmelt fine denier producers in Southeast Asia will remain heavily dependent upon exports to achieve acceptable levels of capacity utilization   Disposable nonwoven demand is growing but remains quite small compared to installed capacity within the region.

Unitika commissioned a 30,000 tonne spunbonded polyester line in Thailand 2017 making them the 6th largest nonwoven producer in Southeast Asia.  Nonwovens from this line will be used in carpet backing, geotextiles, roofing, automotive and other industrial applications.

Ten Cate is the only producer of medium denier spunbonded polypropylene nonwovens in Southeast Asia.  These nonwovens are needlepunched and supply the geotextile market and other related end uses.  Ten Cate’s annual nameplate capacity is 9,000 tonnes and is unchanged since 1996.

According to reports, JOFO (China) will install a carded needlepunched nonwoven line in Thailand in 2020.  The output of this line will supply geotextile and other technical specialty end uses.  JOFO may also consider installing a fine denier spunlaid line in Thailand but no timetable has yet been revealed.